“Accepting the Ashes is both an easy read (short, to the point) and a difficult read, because of its truth and directness. The advice is straightforward and obviously comes from the heart. I appreciate what you wrote, and applaud your work.”
Col Charles W. Hoge, M.D., (Ret) Past Director of Psychiatry and Neuroscience Walter Reed Army Institute of Research and co-author of “Battle Mind” 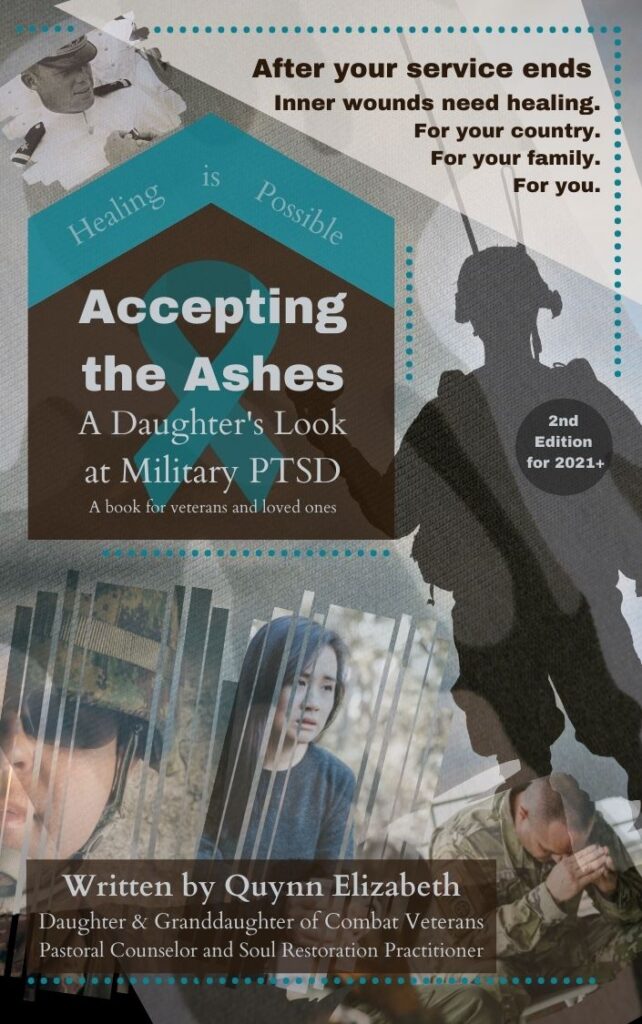 Accepting the Ashes- A Daughter’s Look at Military PTSD
by Quynn Elizabeth
Illustrated by E. Gentry

Originally written in 2004 (the year of her father’s death, and one year after the Iraq war began) and updated in August of 2021, Quynn Elizabeth shares her father’s story of combat, family and PTSD. She hopes that other veterans and their loved ones might not have to wait 30 years to heal their painful feelings stemming from military trauma over the 20 years in Iraq and Afghanistan.

Since 2004, “Accepting the Ashes” has helped many veterans and their families to recognize signs of Post Trauma Stress and has been used by The National Chaplain Center in its national program, the Veterans Community Outreach Initiative.
Whether you are a veteran, loved one, co-worker or fellow American, “Accepting the Ashes” is for you.  Included are 15 simple ideas to help people understand Post Traumatic Stress Disorder, and move toward healing.

“Accepting the Ashes” does not attempt to diagnose or treat any veteran.  It is written from the perspective of an adult daughter, honestly highlighting one man and how PTSD negatively affected him and his family. This short book originally released in 2004, with evocative illustrations by E. Gentry, is reissued in 2021 to acknowledge that 20 years has passed since 9/11/2001. The troop withdrawal from Afghanistan after a 20 year presence exacerbates the trauma of all who have given so much for their countries (both U.S. and Afghanistan), and we honor the memories of those who made the greatest sacrifice.

A message from author, Quynn Elizabeth- “My father was able to come home from Viet Nam, but his experience did not leave him.  Over thirty years after his return, he still struggled with alcohol, depression and self-inflicted guilt.  Only after his death was I able to see into his life by looking through his writings and papers.  Since he never spoke to his family about his experiences in war, I appreciated the opportunity to see more clearly why his life was the way it was, and why my family broke apart.  In order to deal with my feelings of loss, I wrote a little book to other family members like me.  What came of it was “Accepting the Ashes- A Daughter’s Look at Military PTSD”. If I have one message for any veteran, or someone who loves a veteran, it is this- It is normal to have emotional reactions to trauma

”I commend the author for preparing this very helpful little resource for the spouses and families of our veterans. The descriptions of the struggles of combat veterans with the symptoms of PTSD are very accurate.” A. Keith Ethridge, M.Div, Past Director, National Chaplain Center.

Quynn’s life story and this book can be shared with Social Workers, Nurses and other providers who work with Veterans and their families (such as the Caregiver Program, Substance Use Program and Homeless Program).

HOW SOME PROFESSIONALS HAVE USED “ACCEPTING THE ASHES”
“I’ve had the opportunity to share some of your thoughts with veterans in our residential PTSD program, and also in our inpatient psychiatry unit. Your words speak so deeply and clearly to them. We also have the audio CD version, and have played portions during our “Families Matter….and Care” groups within the residential program. Many say “thank God she wrote this book”. Your thoughts and support truly affect those who hear your words.

As part of the Families group, we hand out a folder which contain a number of handouts our clinical staff find helpful. A basic informational handout includes your web address as a valuable resource, and I’m happy to say that when we receive our order of “Accepting the Ashes”, we intend to add a copy to each folder.  Thank you, Quynn, for being guided to write this moving, inspirational and wonderful memoir and support for our veterans.”
VAMC – Memphis, TN

“I have been creating a new paradigm for ministry to combat veterans over the last months. The reason: to be inclusive of our younger and newer veterans from OIF/OEF. The VA is expanding its mandate to include spouses and significant others of our veterans. Your book is to be a benchmark of the outreach to the veteran along with his significant others. You have shared emotionally and sincerely the view of life from the family to the veteran. It is important for this new paradigm that the veterans hear and read what and how their family feel about the veterans’ experiences after combat”
Dept of Veterans Affairs Medical Center Lyons, New Jersey

“I will be developing a family/significant other outreach program with Operation Desert Storm/Iraqi Freedom/Enduring Freedom families. I plan to introduce your book to them and use the audio book in support sessions.”
An East Coast VA Chaplain 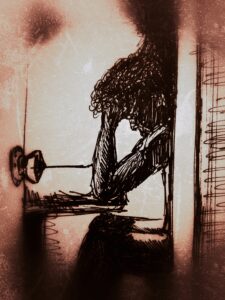 “I personally like the book for many reasons, but one of the most important is the drawings. To me, they capture in a way that words can not, the invisible trap, or “tiger cage” that combat soldiers, or for that matter anyone who has experienced a severe trauma faces. And because it is invisible, in the sense that they may never have been wounded physically, they resist accepting the possibility that they might just possibly have PTSD.  Your book is in the top of my list of seven books that anyone dealing with returning combat veterans should have read.”   A Chaplain in Vermont