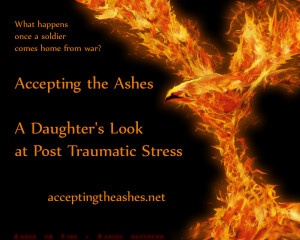 I have been thinking about all the adult children around the country (and the world) who grew up in a home with a veteran affected by PTSD.  For adult children today, we grew up before the times of understanding about that which we call Post Traumatic Stress.  As a culture we are now moving away from calling PTS a ‘disorder’, because we have come to see that when people (men and women) experience one more more traumatic events, it is common, even normal, that such experiences affect the human spirit in a negative way.

However, back in the day, even through the Vietnam war, people did not talk that way about war/combat trauma of the emotional/mental kind.  So, there are many, many adults living their lives today, still trying to understand why their parent (most often a father) was ‘the way he was’.  Recent generations have become familiar with being an adult child of an alcoholic, and now I feel that we have to call a spade a spade, which is that there is a reality in being an adult child of PTSD (specifically caused by war experiences).   I have been thinking specifically about a man I knew once, a man about my own age, and his father too was a veteran of the Vietnam war.  A number of years ago he listened to my audio book and told me that until hearing my story, he thought that his father’s behavior while growing up (as he put it ‘lying on the couch, smoking cigarettes and not talking’) was just his dad. After hearing about my father, he realized that his dad had PTSD from his war experiences.

So, yesterday morning I was thinking about how many adult children of PTSD there are now, and how many children of vets returned from OIF, and returning from OEF, will also grow up in a PTSD household.  I made some calls to some of the 23 networks of the Veteran’s Administration (called VISNs) to connect with each VISNs “Designated Learning Officer” to send them one of my books.  Then I decided to take a walk  with my dog to clear my head.  I rounded the corner on my block, and a bicyclist was riding the opposite way.  Dressed in his riding outfit, he said ‘Hi Quynn’ as he rode by.  I looked at him , trying to figure out who he was. ‘Who are you’ I asked him. He turned around and spoke his name.  My jaw dropped.  It was the exact man who I had been thinking about. The adult child of PTSD who I had not seen in a number of years.  We spoke for a few minutes, catching up, and then I told him I had just been thinking about him and his story, and I asked him if I remembered it correctly.  I recounted my memory of his experience and he said it was correct.  ‘However’ he said ‘I think I knew, even at 7 years old, that what was wrong with my dad was PTSD, even though I didn’t know about PTSD then.’  He knew there was something in him that didn’t belong.  He went on to say that his relationship with his father is not at all close, that there is nothing to say.  He said his father has much power, and if his dad directed it in a good way, he would be a powerful man.  ‘I have the same power’ he said.

We said goodbye for now, and I walked away feeling that a message had just been sent my way.  Adult Children of PTSD is something, and there are many of us, going on with life, getting along, doing the best we can. Every day.   I came home and started a facebook group called PTSD Daughter.  If you are in FB, come join me there. 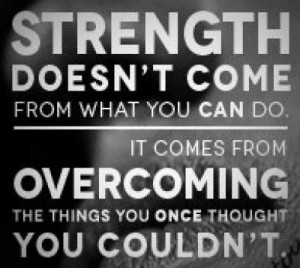 It is Memorial Day, a day when we remember American service members who have died while in the Armed Forces. For this Memorial Day, 2012, a decade of war has left many casualties.  Today I am thinking about the war casuality of the Family.

I wrote my book “Accepting the Ashes- A Daughter’s Look at PTSD” after my father’s accidental death in 2004.  I received an email from a woman who called herself “The Waiting Wife”.  It read “Your story reached into my heart.  My husband is in Iraq right now with the Army National Guard. We have been apart 2 years out of 3.  The stress is much more than I ever thought possible.  Thank you for sharing your story.”  I put this quote on the back of my book.

Right before Veterans Day in 2011, I heard from her again.  Her home life had escalated into a danger zone. She was frantic.  Over the winter we communicated about her situation.  She was in a far more dangerous situation than I had experienced with my father, yet she felt she had no one to help her.  I decided what I could do was to listen.  Sometimes for a couple hours at a time.

Recently, I received a copy of the letter she sent to the Social Security Disability office, telling of her home situation.  As I read it I felt all the families who have died because of war.  In addition to death overseas ripping apart a family, there is divorce, unhealed rage and/or depression, self-medication, and suicide after returning home from deployment.  For this Memorial Day, I honor all who have experienced the death of their family due to war.

Here is her letter, reprinted with her permission.

“I will start with…I’m not a lawyer, doctor or a professional.
I am a 48 year old woman, and a wife who has been married to “Bill” for almost 25 years. I am a mother of two boys aged 17 and 12.
I believe we all have a story, and this is ours.

In March of 2010 I received a phone call that Bill  had been hit with an IED (improvised explosive device).
I was told he had suffered injuries to his back, head, and as well as other issues, such as inner ear damage and memory loss.
I quickly became a caretaker.
After a week we were told to come home and get into the VA system, and that is what we did.
We were put on Leave Status so we could get in VA system, instead of using our Leave for a vacation, like it should be used for.

Bill could hardly walk on his own without help.
He could not drive, I had to take him to all appointments.
He had to have everyday help, like helping put on his pants and his Army boots.

Physical changes I have noticed:
Bill cannot stand at the stove for more than 5 minutes
Bill can not clean house, or do yard work
(Bill used to make good money doing landscaping)
Bill cannot sit or stand for long periods of time.
Bill has to lie down often to use his traction device for back pain therapy.
Bill is in pain, most, if not all, of the time.
Medication (he is on a number of them) seems to help somewhat.

While we have been working with his physical needs,
VA staff, friends, family, and of course myself, have noticed Bill’s mental issues.
I have put many tireless hours into study of PTSD (post traumatic stress disorder),
I even bought a work book.

I feel we all have PTSD sometime in our lives.

I have, in the most nice way, reached out and knocked down doors, to get Bill help for his PTSD.  It has been a disappointment.
I don’t think any of us are ready, trained, or prepared as a Nation, for soldiers like mine.

After 4 deployments, and almost 23 years of military service,
I have come to know…
It is a given…
War changes people.

Bill has always had guns, but they were always put away.
He now has to have 3 at the ready, one under the pillow, one he packs everyday, and a rifle next to bed.
If Bill happens to feel safe he will go to a sporting goods shop.
He recently made a trip and bought $350.00 in ammo.

You might ask, Do I feel safe? NO-
You might ask, Would Bill hurt someone on purpose or with intention? NO-
Could it be an accident? Yes.
I have been walking on egg shells for the past two years.

When I drive down the freeway with Bill in the car (the many times we have to drive to get to the VA) Bill is looking for “one of them”, meaning an Iraqi person with a turban.
Bill has had nightmares, but does not want to talk about it.
If you were to ask me for an emotional assessment of Bill, I would say he is in his late teens right now.

The above is now a new “normal” life.
Bill has not come home from the War Zone.
If you ask him about these issues, he will agree and say he is “fine”.

I now refer to him as my Soldier, Warrior, Veteran, My Hero, but not my Husband.
I waited for my Soldier to come home, ready to pick up and resume where we had left off, with adjustments. I now see that is not going to be possible.

I have been in counseling for the past year.
Bill has gone once, and our boys a few times.

I have, with many tears, filed for Divorce, so our sons and I may have a safe, more peaceful life.
I have given up careers, as well as a teaching career, and many other things, to help care for Bill, all because of WAR.
When I am not able, our oldest son helps his dad, the younger one tries as well to be helpful.

I am now helping Bill look for another place to live, so he may live who he has become.
Some people gave some, and some gave all. This family, for 10 years, 4 deployments later, gave it all.”

After receiving the above letter, there has been more change in the Waiting Wife’s life.  Her husband was served with divorce papers.  The next day she found him with a gun, saying he wanted to “end it”, and that she could “have it all”.  She was able to get him to the VA.  Now he is an inpatient in a Wounded Hero hospital in another state, and he is very angry.  She is still waiting for a normal life.  She is waiting for Bill, and her boys to stop hating her.  She is waiting for peace.

On this Memorial Day, please light a candle or say a prayer for a family that is dying as you read this.